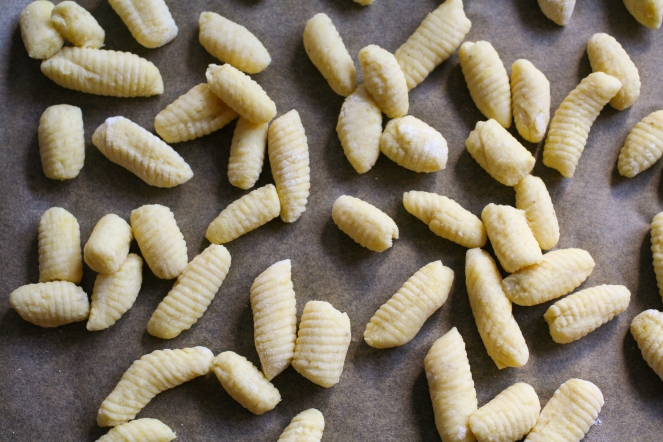 Many Italian towns celebrate a “Gnoccata,” which translates—delightfully—into “Dumpling Festival.” The Gnoccata of Liguria, a northwestern province of Italy famous for its picturesque coastline and the five coastal villages known as the Cinque Terre, falls on the second Sunday in August. Gnocchi, the festival’s namesake dumplings, come in many forms, including a pillowy potato variety (you can find a crude approximation of these in supermarkets), an ethereal ricotta version that resemble “naked” ravioli (i.e. with no pasta shell), or the round semolina gnocchi that are considered Roman style. They can be pressed and cut, formed into balls, or even pressed through a sieve like spätzle, and can either take the place of pasta as a first course or served as a contorni, or side dish. Gnocchi—also sometimes called gnudi or malfatti—are, in other words, incredibly varied and versatile. We are now predictably obsessed with the concept of a festival in a gorgeous location where we could taste thousands of gnocchi.

Here’s an excellent way to start, with two classic gnocchi recipes, both emphasizing summer flavors. Although a simple tomato sauce and a dollop of good ricotta is our gold standard, à la Frankies , we wanted to explore some warm-weather options. You’ll be so happy you added these to your repertoire: both require a little bit of simple technique that’s gratifying to master and pays off beautifully. Next year in Liguria!

Handful of pea shoots or microgreens for garnish

In a large skillet (you will use it again later), blanche the spinach in a little bit of water until wilted, then drain and squeeze as much much liquid out as possible.

In a food processor, combine spinach with both cheese, eggs, nutmeg, salt and pepper and combine until spinach in fine chopped. Add flour and pulse until just combined. FIll pastry bags or ziplocs and chill.

Put a large pot of salted water up to boil.

In the large skillet, cook the diced guanciale or pancetta over medium heat until fat is rendered and it is brown and starting to get crisp. Pour off all but 1 tbsp of the fat, then add the leeks, peas and butter and cook until they are tender, stirring occasionally and lowering the heat if necessary to prevent the vegetables from browning. Set aside.

Once the water is simmering steadily, snip the end off the pastry or plastic bag, leaving an opening that’s about and inch or a little smaller. Holding the bag in one hand and the scissors in the other, begin to press the ricotta mixture out, using the scissors to cut off pieces about 1” thick. Once you’ve finished a bag or your pot looks full, give the gnocchi about 5 more minutes to firm up, then remove them with a skimmer or slotted spoon to a plate. Continue until you’ve used up both bags.

If the sauce has cooled, beat it up again briefly, then turn off the heat, add the gnocchi and carefully stir. Serve in a large bowl with a generous handful or greens sprinkled over the top.

Put all ingredients in the bowl of a food processor and pulse into a rough puree. Season to taste with salt and pepper. Set aside while you prepare gnocchi. 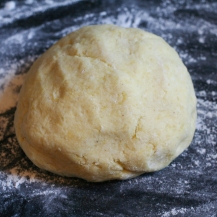 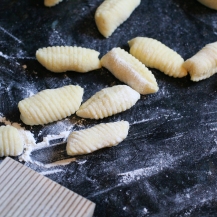 Boil whole potatoes in a pot of salted water for about 20 minutes or until a knife pierces them easily. Once the potatoes are cool enough to handle, peel and pass through a ricer or food mill. In a large bowl stir together potatoes, flour, egg, cheese and salt. Once the dough comes together, knead for a few minutes on a floured surface.

Cut the dough into quarters and roll each piece into a long cylinder until it’s about ½” in diameter. Now cut the dough into ½” pieces. You can leave them as is or roll them on a gnocchi board, if you have one. The board gives the gnocchi ridges that not only look lovely but also hold the sauce nicely. Arrange gnocchi on a baking sheet in a single layer so they don’t stick together. At this point, you may refrigerate or freeze the gnocchi or cook immediately.

To cook, drop the gnocchi in a large pot of boiling salted water and cook until they float, about 2-3 minutes. Drain, sauce and serve without hesitation.