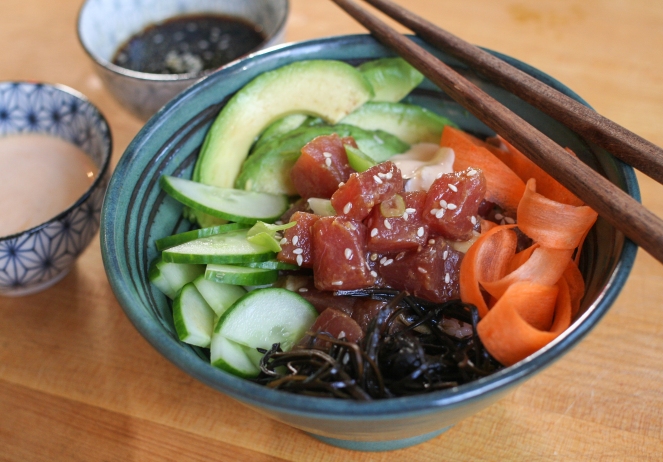 Hawaii, for mainlanders and especially us East Coasters, is a conundrum: a place about which we think we know a lot–based mostly on TV and movies–and which we are sometimes inclined to dismiss as a hokey tourist trap; but that, when we visit, is a revelation of unfamiliar treasures and treats. In some ways, Hawaii is the ultimate American place, despite being thousands of miles off the coast of the contiguous USA. It’s a true cultural and racial melting pot, a land that mixes indigenous tradition with immigrant energy, and it contains everything from strip malls that would feel familiar to a visitor from Wisconsin to volcanoes, rainforests and black sand beaches that are the very definition of exotic.

The food of Hawaii is as diverse and mixed-up as everything else about it. Asian, European, mainland American and native flavors don’t just overlap: they collide in extraordinary ways. Spam turns into sushi, jelly doughnuts become malasadas, Portuguese sweet bread turns Hawaiian, and Japanese ramen morphs into saimin after absorbing Chinese and Filipino noodle soups. It’s less about fussy “fusion” cuisine and more like a fabulous food slam.

Poke (pronounced PO-kay), the raw fish dish on the verge of breaking through as the next “healthy fast food,” is not the craziest Hawaiian dish, but it may be its most universally appealing. Originating as a way for fisherman to prepare the scraps from their catch, it is a looser and more casual version of the kinds of fish dishes that exist in other countries: sashimi, tartare, ceviche. Like all of these, its success rest squarely on the freshest fish you can find. Marlin, tuna, even octopus all feature, along with bold Asian flavors like teriyaki, soy, seaweed and wasabi. A particularly Hawaiian touch is the addition of roasted, crushed kukui or macadamia nuts.

There are so many reasons why poke is being embraced more widely: it’s high in protein and low in carbs, gluten free when made with certain flavors (you’ll want tamari soy sauce in that case), and focused around one super-fresh ingredient. But we like poke even more for its flavors, bottomless adaptability, ease of preparation, and the many ways you can serve it: with coconut rice, in corn tacos, or as part of a grain bowl, just for starters.

Although poke is eaten year-round in Hawaii, we wanted to mark the observation on June 11 of Kamehameha Day, one of Hawaii’s oldest holidays. It was instituted in 1871 by the current King Kamehameha V to honor his grandfather, the first to unify the disparate islands of Hawaii into one kingdom. It’s celebrated with floral parades, at the end of which two statues of the King are draped with traditional floral necklaces, or lei. Then everyone dances, eats and hangs out at block parties and cultural festivals. You never need an extra reason to travel to this amazing state, but June 11 sounds like a fantastic time to be there.

2 cups sushi rice or rice of your choice

½ cucumber, cut in half lengthwise then sliced thin

Cook rice according to directions.

Make marinade and combine with tuna. Stir to evenly coat tuna in marinade. Refrigerate to let flavors meld, for up to 2 hours before serving.

Soak the hijiki or arame in ½ cup of cold water until rehydrated. Drain water and add 1 tbsp mirin and 1 tbsp soy sauce.

Make the ponzu sauce, combining all ingredients in a small bowl.

To assemble bowls, divide rice among 4 bowls. Top with tuna poke in the center, surrounded by the cucumbers, hijiki, carrots and avocado. Spoon some of the ponzu sauce dressing over the veggies and sprinkle with sesame seeds and sliced scallion. Top with a dollop of spicy mayo.