In theory, any food made with oil can be served for Hanukkah, the Jewish festival of light, but we’ve always found it an excellent reason to make (and eat) the kinds of fried delicacies we often don’t the rest of the year. And since lingering over a pan of hot oil isn’t exactly our idea of a good time, the foods we’re willing to do it for have to be really worthwhile! You can go sweet with jelly doughnuts, or sufganiyot, as we have in the past, but our favorite savory Hanukkah treats are latkes, fried potato pancakes.

Like all treasured holiday dishes, people often prefer the style of latke they grew up with. Some people grind the potatoes to a paste, some add matzah meal, some serve them with applesauce and some with sour cream. The two consistent ingredients are oil and potatoes. We’ve made sweet potato latkes in the past, but this year we were drawn to a recipe that adds two other root vegetables, parsnips and carrots. What’s most surprising about these may be how subtly they differ from the traditional all-potato version: carrots and parsnips amp up the caramelized flavor, and nigella seeds add a gentle, smoky crunch. But they aren’t revolutionary or shockingly inventive. You could certainly tinker with these more, should you wish, adding some chopped jalapeño or a dried pepper like cayenne, or perhaps some smoked paprika.

If you have a food processor with a grating disk, it will cut down on the elbow grease needed for this recipe–though some might swear that grating by hand is a necessary part of latke anticipation. But don’t chop the potatoes–the shredded texture is essential here. We also found that shaping the mixture into balls by hand while squeezing out excess moisture makes the latkes extra crisp and cuts down on the spattering that can make frying an ordeal. No matter what, these are worth the effort. 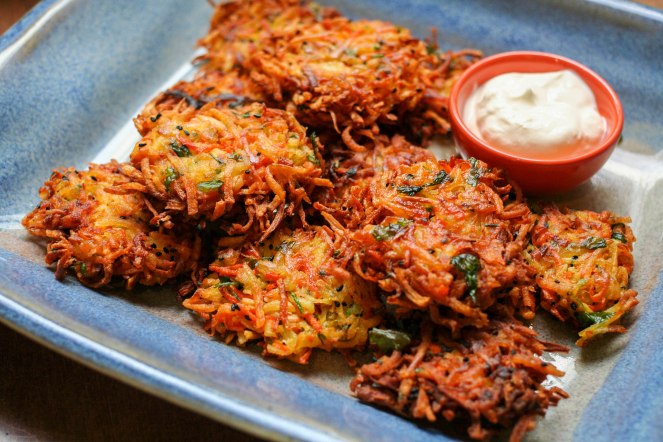 Mix together all the ingredients (except oil and garnishes) in a large bowl until the mixture starts to stick together.

Heat about ½ cup of vegetable oil in a large heavy skillet over medium high heat. Using your hands, squeeze a heaping tablespoon of the mixture to extract the excess liquid and form into a compact ball, then place in pan. Gently press down with the back of a spatula to flatten. Repeat until pan is full, being careful not to crowd the latkes. We cooked 5-6 at a time in a 12” skillet. Cook until golden brown, about 3 minutes, and flip. Cook on the other side for another few minutes. Transfer to a rack or baking sheet lined with paper towels. If wanted, sprinkle with a little crunchy salt. Serve hot with sour cream or greek yogurt on the side.

*If you can’t find nigella seeds, also known as black caraway or charnushka, substitute black sesame seeds or whole cumin seeds or just leave them out.