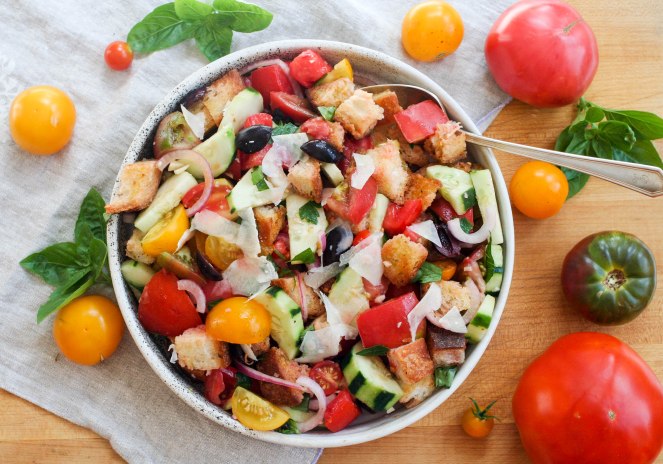 Making and eating holiday foods from around the world is like a magic carpet ride, transporting us across space and time. Ferragosto traces its roots back to 18 BC, when the Emperor Augustus-—in typically Roman fashion—consolidated Italy’s summertime harvest festivals under his own name as the “Feriae Augusti.” Today, the holiday honors both its ancient Roman roots alongside the Catholic feast of the Assumption of Mary, when Mary ascended to heaven. Celebrated in mid-August across the country, Ferragosto is the traditional Italian time for a summer vacation. And really, where would you rather go than Siena, the beautiful medieval city of Tuscany?

Horse racing, also a traditional Italian summer pastime since medieval days, reaches its apogee with Siena’s Palio dell’ Assunta on August 16th. Ten riders, chosen from Siena’s seventeen contrade, or city wards, race three times around Siena’s central piazza. Although the wards bear picturesque names such as Oca, the goose, and Chiocciola, the snail, the Palio is a dangerous, no-holds-barred race in which the jockeys do their best to foul up their competitors, and falls by rival contrade are celebrated almost as joyously as a victory by one’s own. Preceded by a pageant and coinciding with the feast of the Assumption, Ferragosto in Siena is one of the world’s great festivals.

In honor of Ferragosto, here are two dishes ideal for a summer picnic or light dinner. The first is a traditional Sienese spin on chicken liver paté, with some herbal flourishes and topped with delicious fried sage leaves: the traditional Sienese Crostini Neri. An heirloom tomato panzanella salad also works perfectly for Ferragosto, and is one of our very favorite summertime salads.

Rinse chicken livers in a sieve under cold water and drain well. Place in a saucepan with olive oil, onion, carrot, celery and herbs. Bring to a simmer over medium heat, the cover and cook over a medium-low heat for ten minutes. Uncover and cook another ten minutes, adding a splash of water or white wine if mixture dries out too much.

Remove pan from heat, and scrape mixture into a food processor. Add butter and capers and process into a coarse paste–you want to leave some texture. Taste for salt and add anchovies to taste, then process another few seconds until mixed. Scrape mixture into a bowl and chill.

Cover the bottom of a small frying pan with olive oil, then heat over medium heat. Wash as many whole sage leaves as you want to for garnish and dry them well on a paper towel. Fry in the hot oil, watching them carefully so they don’t burn, and remove them onto a dry paper towel to cool.

When ready to serve, slice and toast the baguette, then spread some of chicken paté an top with a friend sage leaf.

1 day old baguette or other crusty bread, cut into 1-inch cubes, about 4 cups

Heat the olive oil and butter in a large saute pan. Add the cubed bread and saute over medium heat until golden and crisp, about 5 minutes. Season with salt and pepper.

For the vinaigrette, whisk all of the ingredients together in a small bowl.

In a large bowl, gently toss all of the vegetables together with the toasted bread and the vinaigrette. Season with salt and pepper. Shave plenty of parmesan cheese over the top. Serve right away or let sit for up to an hour to let the flavors blend.