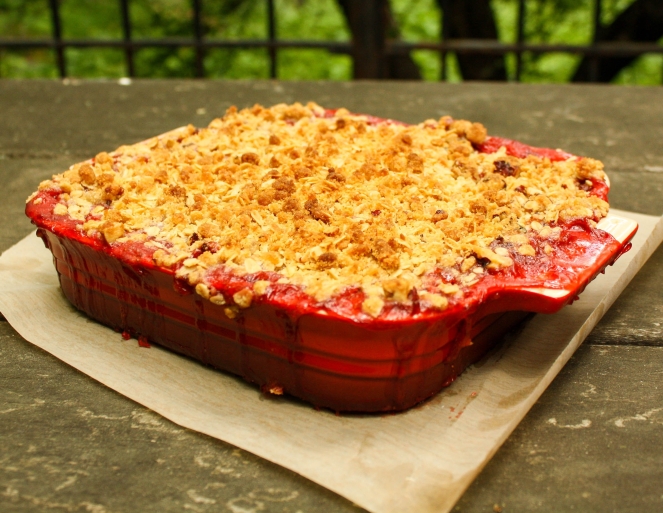 Can you believe we’ve only recently learned about a holiday that’s been around for 150 years? In some ways that makes perfect sense: Juneteenth is about as local a holiday as you can imagine, celebrating not the Emancipation Proclamation made by Lincoln in 1863, but the date when news of it reached Texas on June 19–almost two years later. It’s also a holiday with enormous political and cultural resonance, especially for African-Americans, representing not just freedom from slavery but also how long and tortuous a path that freedom can take. Juneteenth celebrations were picked up and spread to new places by civil rights activists in the 1950s and ’60s, and despite its exceedingly specific Texas origins, is now a holiday or special day of observance in 45 states. We think it deserves wider recognition by all Americans, of all races.

What we love about Juneteenth–in addition to its excellent name—is its emphasis on communities coming together to celebrate and spread the idea of freedom. Juneteenth celebrations are highly local affairs: street fairs and neighborhood parades, barbecues and picnics. Because it falls in summer, it’s also a lovely time to celebrate the best of the season’s fruit bounty, and what could be better for sharing that than a strawberry and rhubarb crisp? We know: one with a sweetly spiced crumble as a crunchy topping and in a layer below the fruit to soak up all those mouth-puckering juices. Best of all, this crisp fits with the Juneteenth tradition of serving food in shades of red, the color of perseverance, a quality we surely need to draw on as we continue to work together towards a world with greater freedom and equality for all. 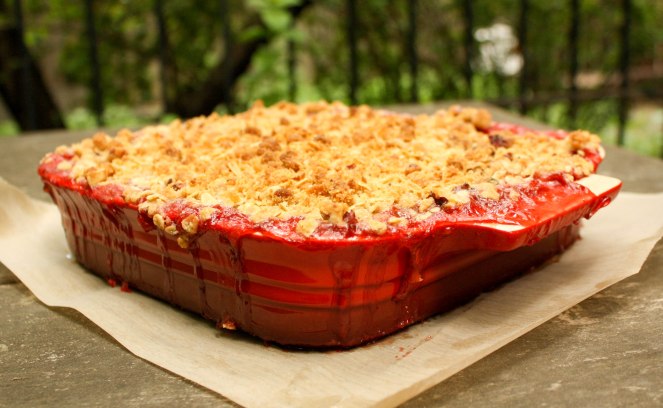 For the base and topping layers:

Center a rack in the oven and preheat it to 350℉. Place a 9” square glass or ceramic oven-proof pan on a lined baking sheet.

Place flour, brown sugar, oats, salt and cinnamon in a medium bowl and blend with your finger, making sure to break up any lumps of brown sugar. Stir in nuts and ginger, then pour the melted butter over the top and stir until no dry ingredients remain. Scrape half the mixture into the pan and press down lightly to form a crust.

Scatter the rhubarb pieces over the top of the crumble. Mix the cornstarch with the cold water in a small measuring cup or bowl until dissolved and set aside.

Place strawberries, sugar and ginger in a medium saucepan and roughly crush the berries with a potato masher or large fork. Bring to a boil over medium heat and then stir in the cornstarch mixture. Using a whisk, stir and cook at a boil for three minutes or until the mixture thickens and is no longer cloudy. Stir in vanilla and pour strawberry mixture carefully over the rhubarb–pan will be quite full–and then crumble the remaining oatmeal mixture over the top.

Cook for 60 minutes, until mixture is bubbling and topping is golden brown. Serve warm or at room temperature. Some vanilla ice cream is a fabulous accompaniment, but it’s perfect on its own as well.