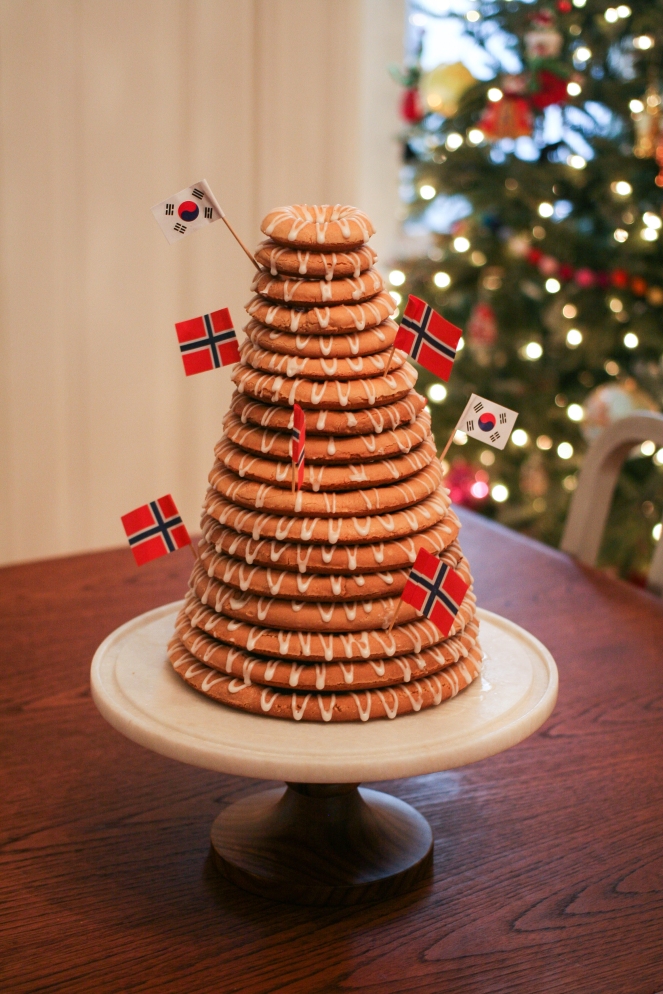 Every year around the holidays, when we see adorable pictures of cute children decorating sugar cookies on social media, it reminds us of the baking projects we’ve done with our own families, as well as the ones we’d still like to do. A quirky series of events fortuitously led us to a new project with all the qualities we like best: a new dish for us, from a different culture, it will make a show-stopping entrance at a party, and is surprisingly easy to get right…even the very first time you make it. We’re posting this early in case you are inspired to give it a try as well, so you have time to purchase the rings plus any personalized decorations you want to add.

Our interest in Scandinavian holiday traditions was piqued by the latest “Frozen” short from Pixar, “Olaf’s Holiday Surprise.” It sparked a conversation with our friend Sang, who had inherited a set of kransekake rings from her Norwegian mother-in-law. We were instantly intrigued by this celebratory almond cake, baked in rings and assembled into a conical tower that bears more than a passing resemblance to a Christmas tree. Danes and Norwegians bake it for lots of special occasions, including weddings and New Year’s Eve, sometimes hiding a champagne bottle in the middle, and decorating it with tiny flags, flowers, or little gifts stuck on with icing.

With Sang, we set out to make the cake for the first time, and admittedly our expectations were low: it looks intimidating. Luckily, the rings we used are perfectly nonstick, and the cake assembly is almost as simple as a children’s project: the uncooked dough has a distinctly playdoh-like texture, although we promise its almond flavor is far superior. All in all, considering this was our first kransekake attempt, we were thrilled with how well it turned out. Sang added a little touch of her own (can you spot it?), making it a truly melting-pot creation: a Scandinavian cake made by American women of Korean, Irish-Italian and Greek-English descent. We can’t wait to make it again.

Optional decorations, in colors of your choosing:

Place the ground almonds and icing sugar in the bowl of a large mixer. Add the egg whites and almond extract and mix with a dough hook (this can also be done by hand, though do your best to keep a light touch). Cover the bowl with plastic wrap and chill in the fridge for at least two hours, or preferably overnight.

Preheat the oven to 350℉. Lightly brush the insides of the kransekake molds with vegetable oil or spray evenly with baker’s spray.

Divide the chilled dough into six equal-sized pieces, then place them to the side and cover lighty with a barely damp, clean dish towel or plastic wrap. Take one of the pieces of dough and divide it into three different-sized pieces: one small, one medium and one large. With as light a touch as possible, roll each piece out into finger-width lengths that are long enough to wrap round the kransekake molds: the rings should not touch each other, but just fill each ring. They also won’t expand much, so try to make each piece as smooth and even as possible.

Fit the longest piece of dough inside the largest kransekake ring, pressing the ends together to seal. Do the same with the medium-sized and smallest pieces of dough. Repeat this process with the remaining five pieces of dough. You may need to lengthen or trim pieces as you go, so don’t worry: the dough is very forgiving.

Place the rings on baking sheets and bake the in the oven for 15-20 minutes, or until golden-brown, then remove from the oven and set aside to cool in their molds until hardened. Transfer carefully to wire racks to cool completely.

Meanwhile, for the icing, whisk the egg whites in a large bowl until frothy. Gradually whisk in the icing sugar until mixture is thick and glossy.

If using white icing only, spoon all of it into a piping bag outfitted as as above.

Sort the cake rings into size order, then pipe zig-zag patterns back and forth over each ring with the white and colored icing if using. You could also alternate rings with white and with colored icing. If you want, sprinkle rings with edible glitter or sparkling sugars. 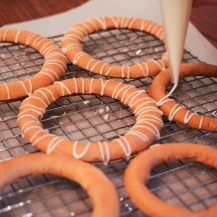 To assemble, pipe a few dots of white icing onto a large serving plate or cake stand, then carefully (try to avoid touching the icing, which will still be soft) stack the rings in decreasing size order. Decorate with little flags, if you want, then allow the icing to set, which will stick the rings to each other. To eat, make a big fuss with the presentation, then allow guests to pull the rings apart and enjoy. The rings will freeze well if you have some left over.