Remember when Sarah Palin claimed she could see Russia from Alaska? Turns out she may have been right…well, kind of. Russia and Alaska are divided by the Bering Strait, which is about 55 miles across at its narrowest point, and some say on a clear day you can see the Russian mainland from the tip of St Lawrence, an Alaskan island in the Bering Sea. So it’s no surprise that Alaska was once a Russian territory. It was until 1867, when the U.S. purchased Alaska for the tidy sum of $7.2 million, a bargain at only two cents an acre. Alaska Day on October 18 marks the anniversary of the transfer of power from Russia to the United States. Sitka, where the stars and stripes made their Alaskan debut in 1867, is now the sight of the annual Alaska Day festival, a weeklong celebration of the native culture.

While some of the more iconic dishes of Alaskan cuisine might be reindeer dogs and Eskimo ice cream (seal oil and reindeer fat mixed with snow and wild berries: you may wait a while for that recipe!), it’s the abundance of cold water seafood that gets us most excited. Think buckets of king crab legs, sweet spot prawns dipped in butter and wild salmon served every way you can imagine. In honor of Alaskans’ love affair with salmon, we’re keeping it pure and simple with a delicious tartare. Serve this as an appetizer or a light meal. We like to serve ours with homemade, thick cut potato chips. Use the freshest wild salmon you can find.

Salt and pepper to taste

Dice salmon into ¼” cubes. In a mixing bowl combine salmon with all of the ingredients and toss gently to combine. Serve immediately or refrigerate up to 1 hour. 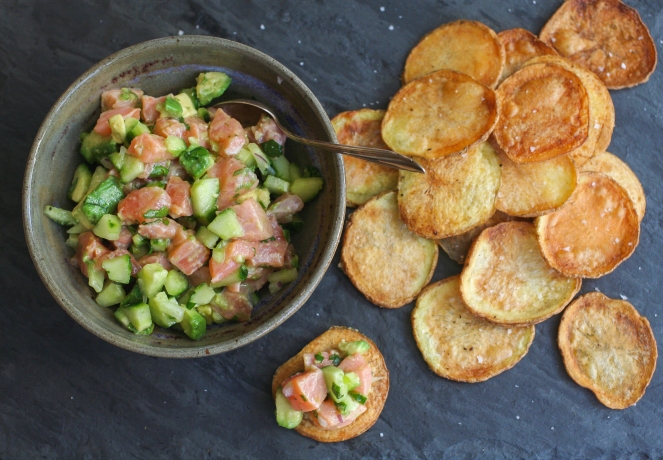 No need for a deep fryer here… your oven will do just fine.

Preheat oven to 400 degrees. Lightly coat a baking sheet with a thin layer of olive oil or cooking spray. Put sliced potatoes in a bowl with olive oil, salt & pepper. Toss to combine.

Arrange potato slices on baking sheet in a single layer. Bake in the oven until golden brown — about 15-20 minutes. For maximum crispiness, transfer potato chips to a cooling rack. Finish with another sprinkle of salt.

One thought on “Salmon Tartare with Homemade Potato Chips”