Sardinia is the second largest island in the Mediterranean, after Cyprus, and one of the most ancient pieces of land in the world. Occupied by people since prehistoric times, it’s a gorgeous island with dramatic cliffs, beautiful rocky beaches, crystal waters and impressive ruins. Like many European locales, it has been occupied over the centuries by a dizzying number of foreign powers, from the German Vandals to the Byzantines, Spanish and Savoyards, and as a result, Sardinians turned inward to preserve their local culture. Even today, though technically part of Italy, it is an autonomous region with a fiercely proud and independent culture.

Although Sardinia has many holidays, often with religious overtones, April 28th is known in the local language as Sa Die de Sa Sardigna, or Sardinia Day. It commemorates an event in 1794 when two local politicians were arrested by the Savoyard government despite the Sardinians’ having helped repel a French invasion for them. Rebellion followed, and the Viceroy who ordered the arrest was expelled from the island, followed by the rest of the Piedmontese occupiers. In the capital city of Cagliari, this drama is acted out each spring with historical costumes and wigs.

Like many regions of Europe, the cuisine of Sardinia is rooted in austere peasant cuisine, especially the foods that shepherds carried with them to pasture. Breads are mostly flat and dry, seasonings are spare, and the pantry is limited, often relying on inexpensive dried beans and home-grown produce. But the inventiveness of la cucina povera has been celebrated for some time now, and Sardinian food is no exception. The weirdest ingredient, and one we won’t be suggesting to you (or anyone, ever) is a cheese called “casu marzu,” pecorino that’s been aged to the point of actual decomposition…and that’s as much as we will share for fear of turning you off the Festive Food Project forever. (Feel free to look it up if you’re an extreme food fan, and not squeamish.) Tastier options include fregola, the semolina pasta that’s like a larger version of couscous, toasted for a slightly nutty flavor. You can use fregola in a soup, or toss it in a salad, but we’ve simmered it with tomatoes, fennel and clams for a fragrant one-pot meal that delivers an amazing amount of flavor for such a simple preparation.

We’ve made two variations of this dish, one with anchovies and one with pancetta. The former has a cleaner sea flavor, while the pancetta adds some salty richness. Make them both and see which you prefer!

½  large fennel bulb, halved lengthwise and thinly sliced horizontally, some fronds reserved if it has

1 14 oz. can diced tomatoes or cherry tomatoes, or 1 or 2 ripe tomatoes, chopped

A pinch of red pepper flakes

Cook fregola in a large pot of boiling water, well salted, until al dente, about 6 minutes. Drain and set aside. 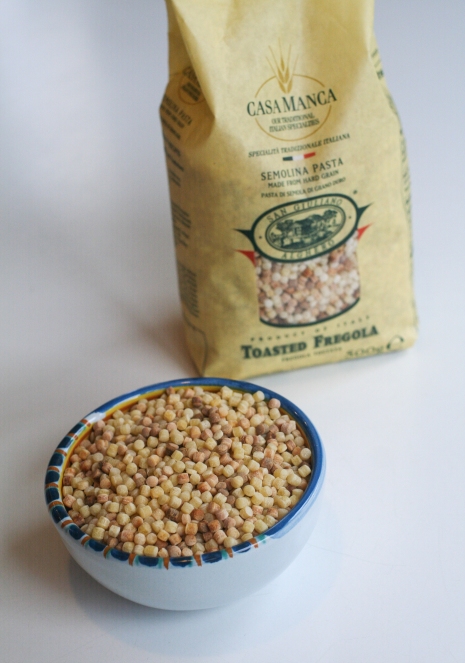 Warm olive oil in a large sauté pan (one that has a lid) over medium heat, then add pancetta if using, or anchovies for a meatless version. Stir until pancetta is browned or anchovies are dissolved into oil, then add onion, pepper flakes and sliced fennel and cook until softened, stirring occasionally.

Add garlic and cook for one more minute, then add tomatoes and cook until sauce is somewhat thickened (this will take longer for canned tomatoes). Add clams and white wine, then bring to a boil and cover. Start checking after 5 minutes and remove clams into a bowl as they open.

Once all clams are open, add cooked fregola and parsley to the tomato mixture and heat through for a few minutes.  The consistency should be similar to a stew. If the dish seems too dry add some water or chicken broth–the fregola tends to absorb a lot of liquid. Check seasoning and add salt if necessary (pancetta version may not need more). Return clams to pot and garnish with fennel fronds and more parsley, if desired.